St. Olaf Graduate is Sowing the Seeds of Hydroponic Farming 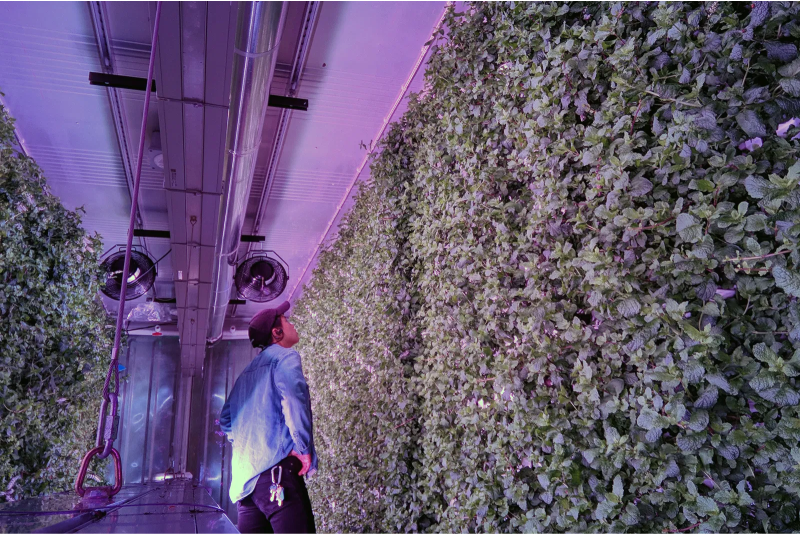 Micah Helle ’18 is helping to redefine what the future of urban agriculture looks like using controlled environment technology.

As a member of the yearlong Next-Gen Farmer Training Program at Square Roots, a mushroom farmer at Smallhold, and now a hydroponic farmer with Pillsbury United Communities, Helle is cultivating and increasing access to local, sustainably grown food. Their motivation to change ideas about farming and what a modern farmer looks like inspired them to work in urban agriculture.

“I was worried about the future of local food and small-scale agriculture work. That’s what turned me to urban agriculture and working with Square Roots,” Helle says. “I was determined to find another way of getting good food to people everywhere, and year round.”

“Seven other farmers and I were in charge of learning the ins and outs of hydroponic farming within our modular farms through hands-on training and a classroom-based curriculum,” Helle says. “We also introduced customers to our products and started meaningful dialogue around local food and the need for innovation within the industry.”

Although Helle was not always sure what they wanted to do after college, they credit their experiences at St. Olaf with preparing them for a career in agriculture. It all started with their first visit to campus.

“I stepped on campus and felt that everyone I met took an interest in me as a person and not just as a prospective student,” Helle says. “It was the personal notes and phone calls from students during the application process that made me feel welcome. I also chose St. Olaf because I felt that the liberal arts education would allow me to explore areas outside my biology major.”

The support at St. Olaf helped Helle land summer internships that would nourish their love for food and agriculture. For two summers, Helle interned at the Liberty Prairie Foundation, a nonprofit in Illinois that supports ecological, local food enterprises. They served as communications intern the first summer and community food systems intern the next. As the community food systems intern, they led a food rescue program where they recruited teams of volunteers and taught them how to harvest, wash, and pack fresh produce in the field to be later delivered to local food pantries.

Classes on campus also helped Helle make connections between their studies and their career interests. In particular, a bioinformatics course that Helle took their senior year sparked their interest in the crossover between science and agriculture.

“The class was a blend of computer science and a continuation of intermediate genetics,” Helle says. “It was also the hardest course I’ve ever taken, but it was so rewarding.”

And Helle was right about St. Olaf’s liberal arts approach: While they majored in biology and took many environmental studies courses, they were also able to take advantage of off-campus opportunities to study Spanish in Ecuador, classics in Rome, and sociology and anthropology in Thailand. Outside the classroom, they co-captained the women’s varsity soccer team, played Ultimate Frisbee with St. Olaf Vortex, and served on the St. Olaf Athletic Advisory Board.

Helle completed the Next-Gen Farmer Training Program in 2019 and then worked as a mushroom farmer at Smallhold, an organic mushroom farm that grows their produce inside controlled environment minifarms in grocery stores and restaurants around New York City, through early 2020. Their job at Smallhold not only built off of their previous work with Square Roots, but also involved more technical aspects as well.

“At Smallhold, I also troubleshooted HVAC, electrical, mechanical, plumbing, and micro-controllers in the units with our small farm team,” Helle explains. “Like Square Roots, Smallhold is mission-aligned and wants to provide real, local food to people in urban areas.”

Helle’s work at Smallhold helped them diversify their knowledge of crops and gain more experience in agricultural technology. “I enjoyed the challenge of understanding different farm systems, because no two farms look the same,” Helle says.

Having recently returned to Minnesota after several years in New York City, Helle is now working with Pillsbury United Communities, a community-building organization working to co-create societal change and justice, as their hydroponic farmer. As part of Pillsbury United’s urban agriculture and food security enterprise, Helle works at their shipping container hydroponic farm in North Minneapolis, which provides food that is distributed to grocery stores around the metro area.

“It’s a very holistic job and I’m wearing a lot of hats, which is great,” Helle says. Whereas Helle used to work on larger teams in New York, they now hold a more independent role at Pillsbury United as they work on maintenance, irrigation, commercial production, crop planning, and seed-to-shelf logistics. “It’s more responsibility than I’ve had before. But it also comes at a time where I feel good about leading and teaching. I’m happy to get back to my roots in the nonprofit space by focusing less on revenue and more on impact.”

Working in Minnesota with Pillsbury United has brought things full circle for Helle. While hydroponics technology is growing in popularity on the East Coast, it still lacks support in the Midwest, and Helle wants to fill that gap. “For me, to come back and be able to share this technology with the Midwest region that really needs year-round growing capabilities is huge,” Helle says. “But I would also personally love the opportunity to train people of color in these systems, because agtech can push to be more racially diverse. We have an opportunity to redefine what the future of this food system looks like, and we have a responsibility to make sure that is as inclusive as possible.”

As Helle continues to pursue urban agriculture, they want to help take controlled-environment agriculture to new heights. “I would love to become more involved in research and development in this space to help direct the commercialization of new products in the industry,” says Helle. “I am interested in pushing the limits on what types of food we can grow indoors with farmer-assisted technology. My goal is to preserve the farmer’s story and livelihood and to inspire the next generation of farmers to think outside the box.”